Skip to main content
Your health and safety are our highest priority during this time. Click here for our precautionary measures.

The baseball season has started, NASCAR has revved up for the summer and football is right around the corner. All these sports, at one time, could only be enjoyed during the day. Mr. Electric®, a company committed to powering tomorrow, looked at how electricity and lights changed sports forever.

On the night of September 28, 1892, the game of football was changed forever when Wyoming Seminary played Mansfield State Normal School in the first-ever night game. The game lasted 20 minutes, consisted of a total of ten plays and ended with neither team scoring. The game ended early due to several players getting hurt by running into light poles caused by the insufficient lighting system. The first night game West of the Mississippi was played in Kansas by the now, Wichita State, and Sterling College in 1905. With upgraded lighting systems many games are now played at night. On September 28, 1992, Monday Night Football celebrated “100 years under the lights” in a game featuring the Kansas City Chiefs and St. Louis Rams. 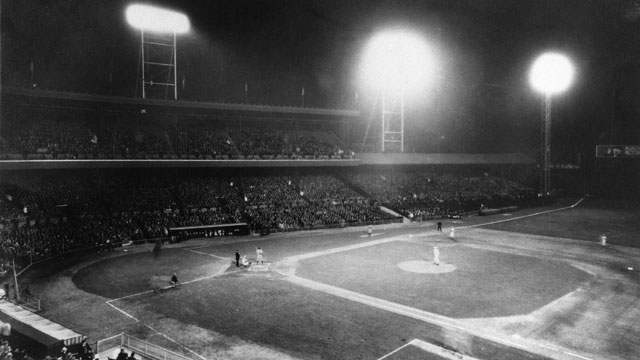 On My 24, 1935, the Cincinnati Reds played the Philadelphia Phillies in Cincinnati in the first night baseball game.

Baseball was behind football when it came to playing at night. Though teams had played at night since the 1880s, many teams did not make it common practice until many years later. The first ever Major League Baseball game to be played at night took place on May 24, 1935, in Cincinnati when the Cincinnati Reds played the Philadelphia Phillies. The Chicago Cubs were the last Major League Baseball team to finally host a game at night in their home stadium of Wrigley Field. The game took place on August 9, 1988. The World Series had its first night game in 1977. Now, every Major League Baseball stadium has lights and night games are a common occurrence.

Bristol Motor Speedway was the first NASCAR track to have lights installed for night races in 1992. In order for night racing to take place in NASCAR lights had to be designed that would not blind the drivers as they raced around the track. Bristol was one of the first tracks to have night racing. Since 1992, many tracks have added lights for night racing. Some of the most popular night races take place at Kansas City, Richmond, Charlotte and Bristol Speedways. None of these sports would be where they are today without the advent of electricity and intelligently designed lighting systems.

Become one of our satisfied customers